1st Burrill-Ulladulla Scouts meet Mondays 5:30pm-7:30pm during school terms.
Scouts is for children aged between 11 and 14 years
Scouts comprise a Troop which is made up of approximately four Patrols and should not contain more than 36 Scouts.
Section Meetings are held for 120 minutes weekly in the Group Hall. Troop Council is responsible for the broad program planning, routine Troop management and for the policies and operations of the Troop under leader guidance. Patrols are encouraged to also meet entirely on their own at private homes and as expeditions.

The program style involves activities that give them a sense of achievement and follow their special interests with intensity. Scouts are formed into stable Patrols of four to eight members. The Patrol is the basic unit for activities and training as well as giving opportunities for leadership. A Patrol Leader is appointed as head of the Patrol and is responsible for the training and development of the Patrol, setting and achievement of goals and fostering well-being of the Patrol. The Patrol Leader also chooses an Assistant Patrol Leader to assist.
The Scout award scheme is structured in three levels after the completion of the Scoutcraft badge. Each level requires the completion of the major badge (Pioneer—Red, Explorer—Blue or Adventurer—Green) which has both compulsory & elective Targets, a Patrol Activity badge and a number of Proficiency badges to be awarded a Cord. Completing all cords, the Scout Leadership course and a leadership activity leads to the Scout Medallion award. 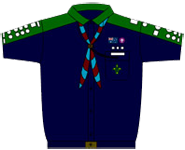 The core uniform is a dark blue shirt with the relevant youth Section colour across the sleeves, yoke and collar; a blue belt; scarf and woggle. There are two styles available for Scouts to choose from: woven fabric button-up shirt style or knitted cotton polo shirt. (Joey Scouts have can only wear the polo style). Our Group has chosen to add dark blue shorts or pants, blue socks and black shoes to be worn as the formal uniform. Scout broad brimmed hats & caps are also available to purchase. All sections also have a “camp” uniform to wear during some activities. See your leader for more details. 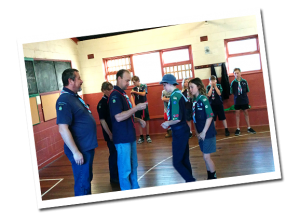 Ceremonies: When the Troop meets in the hall the Duty Patrol Leader starts the opening ceremony. The Scout Leader then takes over and there is a Flag Parade/Break, followed by an inspection. At the end of the meeting there is a Flag Parade/Down, prayers and then the Troop is dismissed. If someone is becoming a Scout for the first time an investiture will take place.
Click Here to make an Enquiry