1st Burrill-Ulladulla Cub Scouts meet Tuesdays 5:30pm-7:00pm during school terms.
Cubs is for children aged between 8 and 11 years
Cub Scouts comprise a Pack which is generally limited to 24 Cub Scouts of four Sixes.  Cub Scout Sixes are led by a Sixer. A Sixer is generally one of the older Cub Scouts and is appointed by the Cub Scout Leader in consultation with other Leaders and is identified by Sixer badge on their uniform. A Sixer is helped by a Second is identified by a Second badge. Cub Scout adult Leaders are known by names such as Baloo and Bagheera which are derived from the Jungle Book by Rudyard Kipling.
Section Meetings are held for 90 minutes weekly in the Group Hall. Programs may include a short talk, a jungle play, a yarn, games and prayers.

The Program Style involves activities that are short and wrapped up in the spirit of make-believe. Games of every sort are played to ensure balanced training. Leaders use general Pack games, inter-Six games, sense-training games, relays and games that help in the practice of  testable skills. Stories, play acting and  handcrafts are also important. 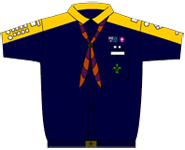 The Cub Scout award scheme has three components—the Boomerang Scheme with three age appropriate levels, Achievement Badge scheme based on personal areas of interest and the Grey Wolf Award.
The core uniform is a dark blue shirt with the relevant youth Section colour across the sleeves, yoke and collar; a blue belt; scarf and woggle.  There are two styles available for Scouts to choose from: woven fabric button-up shirt style or knitted cotton polo shirt.  (Joey Scouts have can only wear the polo style).  Our Group has chosen to add dark blue shorts or pants, blue socks and black shoes to be worn as the formal uniform.  Scout broad brimmed hats & caps are also available to purchase.  All sections also have a “camp” uniform to wear during some activities.  See your leader for more details.

Ceremonies: The Grand Howl is the opening ceremony.  It is a universal yell used by Cub Scouts all over the world. It is a greeting to their Leader and a challenge for each Cub Scout to do their best to keep the Cub Scout Promise. Other ceremonies include a flag parade which is conducted at the opening and closing of a Pack meeting. There is also an investiture for new Cub Scouts.
Click Here to make an Enquiry